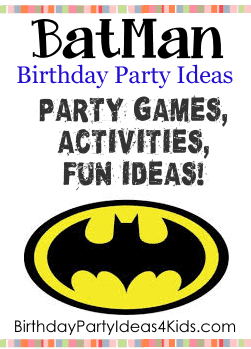 Cut out a bat signal from thick yellow paper. On the back, write all of the party information.

Cut a cape out of a black piece of paper.

Cut a yellow piece of paper in the same shape but slightly smaller. Paste onto the black cape so that the black shows on the edges. Write the party information on the yellow paper.

For help with filling out the Batman party invitation or making sure guests RSVP for the party see our RSVP page with great invitation advice for party planners!

To make a fun and easy garland, blow up black and yellow balloons and hang them on a string. You can alternate the colors or make some all black and the others all yellow.


If you have Batman comics lying around, you can use them to make a unique bunting decoration! Just cut the pages into long triangles and sew them on a piece of thick string, leaving a few inches of space between each triangle. Hanging up your cool decoration anywhere and everywhere!

Hang a black tablecloth on the wall that you want a backdrop. Blow up yellow or black balloons and line them at the top of the tablecloth. Attach black and yellow streamers at the top so that they fall down to the floor. If you want to twist them to give them a fun look, make sure you attach them at the floor as well.


Batman vs Joker
Pair everyone off into groups of two, one being Batman and one being the Joker. Hand each Batman a role of streamers and have them try to completely wrap their Joker. As the Batman's are doing this, the Jokers move their arms and legs to make it harder on their Batman. The first Batman to use all of his/her streamer is the winning Batman, and the Joker that takes the longest to be wrapped is the winning Joker.


Free Batman!
A day or two before the party, fill two large containers (that are about the same size) with water and put into the freezer. After a few hours, add a small Batman figurine to each so that he is in the center of the block of ice.

During the party, divide all of the participants into two groups and give each child a water gun. Set one of the blocks of ice in front of each of the groups. Have the kids shoot the blocks of ice with their water guns until their Batman is free.
The first team to do this wins!

Using felt and elastic string, cut out and make a bat mask for each child. Give them their mask whenever they enter the party so they can wear it during the games!

Print out and laminate pictures of Batman’s enemies (the Joker, Penguin, Mr. Freeze, etc.) Hang these pictures somewhere sturdy, such as a fence or a wall. Give each child a water gun and have them shoot the villains.

For younger kids, decorate a wagon to look like the Bat mobile and give each child a ride around the party.

Have the kids make their own photo booth props.
Lay out colored paper, markers, glue, and anything else they need to be creative. Attach their creations to sticks (pipe cleaners work as well) and have them pose for pictures with their props.

Print out small bat signals from online and cut them out. Attach the bat signals to lollipop sticks and then put them into the cupcakes for an easy Batman dessert!

Create a candy bar with black and yellow candy set out in decorative jars. You could use jellybeans, sixlets, M&Ms, goldfish/Oreos, and gumballs. This can double as a party favor for when the guests go home!

Give the food served names that have to do with the Batman theme, such as Joker Juice, Poison Ivy Pizza, Mr. Freezes Fruit, Catwoman’s chips, and Penguin’s dip.

Buy little flashlights and batman stickers from the store. Attach the stickers to the glass of the flashlight to create a bat signal.

Use Batman Band-Aids, pencils, and stickers as party favors.

Give the guests small bags of black and yellow M&Ms.

Encourage guests to come dressed up as Batman If possible, have a family member/friend find a Batman costume and make a surprise appearance!