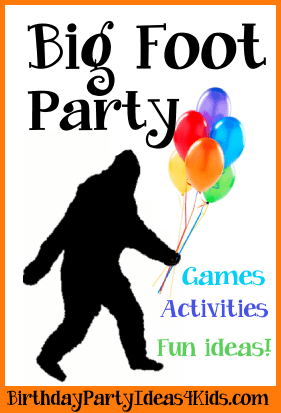 Big Foot, Sasquatch, Yeti ... whichever name they go by in your part of the world they all spell FUN for a party theme!

Party guests will have fun with the Big Foot party games and activities that are listed along with all the fun ideas for favors, decorations and much more!

Big Feet Relay Races
Before the party make super big feet out of foam poster board.  Cut out large feet shapes (at least 2 feet long) from foam poster board.  In the center of each foot cut two holes horizontally about 4 inches apart.  Thread rope or twine through the holes.

The rope can be left long so that players will have a handle to hold or cut off so that it will tie around the players shoes.   Have players pick teams (Big Foot, Yeti, Sasquatch) and line up one after the other.  On go the first player from each team runs with their Big Foot feet to the other end of the playing field and back.  Then the next person on the team goes and so on until all players have raced.   The first team with all their players to finish wins!

Here are some fun variations to the relay races:
Have players race backwards for a second round!
Have players race sideways for a third round!
Set up an obstacle course that the players have to maneuver around with their big feet.

Big Foot Marbles
Fill a small kiddie pool with water and at least 50 marbles.   Players must try to remove the marbles from the pool using only their toes.  Set a time limit and at the end see who removed the most marbles.   Play several rounds.

Squished Sasquatches
Squished Sasquatches is a fun variation of Hide and Seek, which of course, is the perfect game for a Big Foot party!   The basic rules to Hide and Seek are that one person is "it" and hides their eyes while the rest of the players go hide.  The player who is "it" searches and tries to find the hidden players.

The twist on this Hide and Seek Game is that "it" is the only one that goes to hide at the beginning of the game.   Everyone else hides their eyes and counts to 100.   Then the players go and look for the Sasquatch.  When a player finds the hidden Sasquatch they hide with them.   Then when another player finds the two hidden Sasquatches they hide with them also and so on until all the players are hiding in the same spot and are found by the last one searching.  The last one searching becomes the new Sasquatch.  Very fun!

Yeti Scurry
Players form into teams and try to be the first team that goes from the start to the finish point by using only a few pieces of paper or "icebergs".

Before the party create large icebergs from poster or foam board.  Pieces need to be at least 16" x 16".   Each team will need one more piece then the total number of players on their team.

Teams move in a single line together by only stepping on the icebergs.  Each player will begin by standing on an iceberg piece.  The player in the front of the line will take the extra iceberg and place it in front of them.  They will then, as a team, step forward onto the iceberg that is in front of them.  The player at the back of the line will pick up the piece that they just stepped off of and pass it down the line to the front player.  And so on until the line has moved down the playing field.  Instead of large teams this game can be played by giving groups of 3 - 4 players two large icebergs to move with.   Lots of fun and laughter!

Sasquatch Scavenger Hunt
Set up a fun Sasquatch Scavenger Hunt around the neighborhood.  Before the party hide small objects (plastic feet, yellow Big Foot Crossing signs, etc.) around the neighborhood and have players try to find the objects. Send them out in teams or all together with binoculars (can be given as a party favor after the party) to look for the items.

Variation:  You could also set out clues for the party guests to follow that lead them to the location of an adult or older sibling dressed up as a Big Foot.  Give guests whistles to signal when they have found a clue so players can gather to read it and try to figure out the next spot where a clue is hidden.   This variation is easy to set up inside.   See our Treasure Hunt page for more ideas.

Big Foot Selfie
Create a life size Big Foot (8 - 10 feet tall) out of cardboard.   Prop him up next to a wall inside and take pictures of each guest with the Big Foot.   Print out pictures and send as a thank you after the party.

Or set up the cardboard Big Foot outside near some trees (luckily without guests knowing) and take pictures of the guests during the party with the Big Foot in the background.   Send out as a thank you and they will all be shocked that Big Foot was watching them the whole time!

Big Foot Nature Project
Let party guests make their own miniature forests for a fun craft that can double as a party favor.   Set out clear plastic containers along with rocks, dirt, small plants and succulents and small forest animal figurines.   In the center make a path that has Big Footprints on it going through the forest.

Decorate the party area to look like a forest.

Set up signs around the party area and entrance that say "Big Foot Crossing".

Serve Bigfoot burgers - cut out hamburger patties with a foot shaped cookie cutter.  Cheese, fruit and bread slices can also be cut out with the cutter.

Make Big foot sugar cookies before the party and set up a cookie decorating station.  Birthday guests can decorate cookies with sprinkles and candies to take home with them after the party.

Goody / loot bags can be made simply and cheaply by using a plain brown paper bag with handles.  Stamp a Bigfoot picture on the front and fill with green and brown tissue paper.