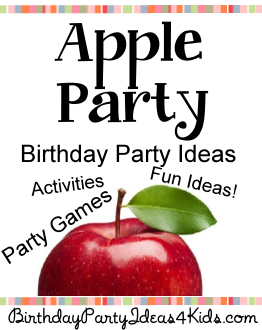 Here are all the readers favorite Apple birthday party ideas.  Pick and choose which ideas fit your budget and child and combine them into the perfect party!

Included is a Fall theme Scavenger Hunt with a free item list that is perfect for an Apple birthday game or party activity!

Apple Pass Game
Small red balls or painted ping pong balls / Red solo style plastic cups
Divide the Apple birthday party guests in to teams of 2 each.
Every team member gets 1 Red plastic cup.  Players on each team line up one behind the other in a straight line. At one end of the teams line place a container of red balls.


At the other end of each teams line set up an empty container. Teams pass one "apple" at a time to the next player in line until their empty container is full.
On “go” the first person in line will scoop out an "apple" into their cup and put it in the next players cup, then the second player will pass the apple to the 3rd player in line and so on until the last player in line puts the apple in the dish at the end of the line. The teams race to see which team can move their apples down their team row the quickest.

Teams pass one apple at a time or ...
Teams can pass as many apples down the line (one at a time) as they can.  In this version no player can have more than one apple in their cup at a time.

Kids love this game so play a few rounds!

Give the winning team (best 3 out of 5) a small prize or let them start the next game first or line up first for ice cream and cake.

Variation: party guests Have the players in each team stand farther apart (5 feet) so they have to run to the next player to get their acorn and to pass it or ...  Have players sit in a circle. On the second round have players reverse direction and pass the acorns back to the front of the line.

Apple Relay Game
Wooden Spoons / Small apples
Divide party guests into two equal teams.
Each team get a large wooden spoon and a small apple.
The goal is to be the first to have all team members carry the apple on the wooden spoon to the other side of the playing field and back.
The players one at a time run from the starting point, around a chair at the other end of the room (or a cone) and back without dropping the apple from the spoon.

If the small apple falls off of the wooden spoon as they are going through the course then that player has to  return to the start and begin again.

First team with all their players to complete the relay wins.

Before the party write a number on the "apples" and hide them all around the "orchard" or party area where you will be playing the game.  The numbers can correspond to a prize they will win when they find that apple.  Or simply add up the numbers at the end of the hunt and the player with the highest score wins a prize.  If you are using red plastic eggs fill they can also be filled with fun apple themed party favors that the kids can take home after the party is over.

Give each guest a red or green paper sack and tell them to find the hidden apples.

For younger players make the apples out of different colored foam or cardboard.  Make the same number of apples for each color.  Assign a color to each player and they can only collect their own color during the game.

Players try to pop other players red balloons.  They also have to guard against their balloon being popped at the same time!

Blow up one red balloon for each player and attach it to a two-foot long green string. Tie one end of the string of one balloon onto each player’s ankle.
Players start in a large circle and on "go" have to try to stomp the other players apples.  The last player that has their red balloon and it has not been popped wins! Variation:  Instead of one balloon give each player two balloons and tie one on each ankle.

The Fall Scavenger hunt list is free to print out.

Players are divided into 2 equal teams.  Each team is sent out with a supervising adult.

Players try to throw their apples into the wooden baskets to get the most points.

Label the baskets with different point values (10, 25, 50 points) and set them out where the closest basket has the lowest amount of points.

One at a time the players toss their apples into the baskets and try to get the highest score they can.  They have 5 tries each.  If an apple misses a basket then they can try again one more time with that apple, but after the extra throw the apple is out of play and they can not earn points from it.  Add up each players points after their turn and present the winner with a small prize.

Bite the Apple Game
Apples (one for each player) / String
Players try to take bites out of their apple that is suspended from a string.  Much easier and less messy than apple bobbing!

Before the game tie strings onto each apple.  Then hang the apples by the strings from the ceiling or under a doorway.  Make the lengths of the string so that the apples hang right at the mouths of the players.

Apple Stack Party Game
Apples (5 for each player) / Flat surface like a kitchen table or island.
Players have to stack their apples on top of each other.
Give each player five apples.
On "go" players try to stack their apples, one on top of the other, until they have all five apples stacked. To win a player must have the apples stacked and the stack can not fall over for a 5 second count.

Play a game of Apples to Apples for older children.


Set out apples with a sturdy stick through the middle and melted caramel along with dishes of:
M&M's, sprinkles, chocolate chips, candy corn and nuts if no one at the party has a nut related allergy.

Apple Marshmallow Pops - put a wooden or food grade skewer through a large marshmallow and dip in water.  Shake off excess water and roll in red colored sugar or red sprinkles.

Red paper plates (attach a small green leaf made from construction paper to transform them into apples!)

Red solo style cups (make green leaves from craft foam and poke a brown straw through the leaf and place in cup to make a fun apple container!)

Fall Would You Rather Game