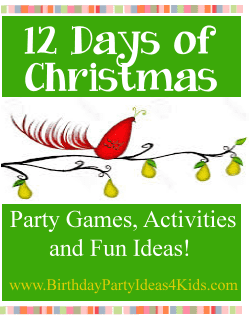 Partridge in a Pear Tree
Rolls of toilet paper, green garland or tinsel, plastic partridge, plastic pears
Separate players into teams and supply each team with several rolls of toilet paper and green garland. The players must wrap one of their teammates in the toilet paper and garland to look like a Christmas tree and place the partridge in the pear tree.  The team who uses the most amount of their items in 5 minutes wins!   Have extra toilet paper rolls available and play several rounds so everyone gets a chance to be the pear tree.

Give each player 15 - 20 cotton balls and see who can transfer all their cotton balls within the 5 minute time limit.

4 Calling Birds
4 Yellow, green or red balloons or 4 play balls
Have players sit or stand in a large circle and give one player a blown up balloon.  The player calls out a holiday or Christmas item (reindeer, snow, Santa, etc.) and then hits the balloon towards another player in the circle.  The player must catch the balloon and immediately call out another holiday item.   After calling out the holiday item they hit the balloon towards another player.   If a player can't think of a holiday item to call out or repeats one that has already been said they are out.
After the players have played for a minute add in another balloon or ball and have them both going around the circle at the same time.   Continue adding balls until you have 4 balls going around the circle!

5 Golden Rings
yellow hula hoops
Divide players into 2 teams.  Players in each team form a line and hold hands.   The player on the end takes the golden ring and passes it through their body to their other arm and then to the next person in line.   Teams have to hold hands the entire time.   The first team that passes the golden ring through their line and back wins!

6 Geese a Laying
2 – 3 rolls of clear packing tape, lots of small prizes and wrapped candy.  2 dice
The object of the game is for the players to try and unwrap the "goose egg"  while it is their turn to get a prize.
Before the party start to make a large round ball (goose egg!) by wrapping the packing tape around and around itself.  When you have a round base, about 2” diameter, start to add candy and prizes one at a time as you wrap the tape around the ball.  When you are done the ball should be large and have candy and prizes inside in layers.

During the game have kids sit in a circle.  Give the ball to one player and the dice to the player next to them.   On “go” the player with the ball will try to unwrap the tape and get to a prize.  While the 1st player is trying to unwrap the ball the player with the dice is rolling over and over trying to get doubles.  When the dice land on doubles the ball goes to the player that was rolling the dice and they begin to try and unwrap a prize.  The dice are passed to the next person.   This is a fun and fast paced game!
Variation:   If you have time and enough prizes make several "eggs" and have them in play all at the same time ... with just one pair of dice!

7 Swans a Swimming
Unbreakable Christmas ornaments, string, belts, empty soda cans, table
Attach a round Christmas ornament to a 2 foot string, then attach the string to a belt. Have the player put the belt on so that the ornament is in back of them. Set ten empty soda cans on a table and have the player swing the ornament around to try and knock over the cans. The players cannot use their hands! (Adjust the length of the string depending on how tall players are)  Funny game to play and watch!

8 Maids a Milking
Ice cube tray, small toys, prep time the day before the party
The day before the party place small toys inside an ice cube tray, fill with water and freeze.
Give each guest a frozen ice cube and on “go” they must try to be the first to get the toy completely unfrozen.  They can use only their hands, breath or body to get the toy out of the ice.  Fun game and kids love it!

9 Ladies (and Gentlemen) Dancing
Empty tissue boxes (large), rope or belts, jingle bells
Attach an empty tissue box to the player’s waist using a rope or a belt. The opening should be facing the back. Fill the tissue boxes with ten jingle bells. The players then must jump, dance, and wiggle around to get all of the bells out of the box in one minute.

Teams move from start to finish line by leaping onto paper islands.
Cut  large rectangular shapes from green or red (or both) poster board about  15"  x 18" each.   Give teams 1 more island then the number of players on the team.
Teams can use only the islands to get from one end of the room and back to the starting line.   Teams use the rectangle pieces to move by laying out the paper in front of the teams in a row and each player stands on one piece of paper.

This continues until the whole team has made it across the playing field and back again. If a player steps off the rectangles the whole team has to go back and begin again.
Variation:  Divide the guests into smaller groups of three or four and give them only 2 large poster boards.

11 Pipers Piping
Pipe cleaners / Froot Loops cereal
See who can thread the most fruit loops onto a pipe cleaner only using one hand.  Set time limits of 1 or 2 minutes and play several rounds.

Santa!
Have an adult dress up in a Santa suit or hire a professional party entertainer to play Santa for the party.  Give each child a chance to sit on his lap and tell him what they would like for Christmas.  This is also a great photo opportunity to take a picture and send it to the party guests later with a thank you card.

12 Days of Christmas Scavenger Hunt
Teams must find as many of the items on the list as possible – only 1 item per house.    For example teams try to find 5 gold rings, but one per house. Creativity counts! For example a  gold ring could be a golden wreath, yellow bread tie in the shape of a circle or a sticker with a gold ring on it.

Divide into two teams and give each team a copy of the 12 Days of Christmas Scavenger Hunt list, a large bag to hold the items and a pen or pencil to mark off the items they have found.   Assign one team even numbered houses and the other team odd number houses so there is no overlap.   Set a time limit – 1 hour to 1 ½ hours.  Teams must check in to the start point before the time limit expires or they are docked 1 point per minute they are late.  Each item is worth 1 point.  Make sure adults accompany teams throughout the neighborhood.

1  Partridge in a pear