30 Christmas Minute To Win It Games 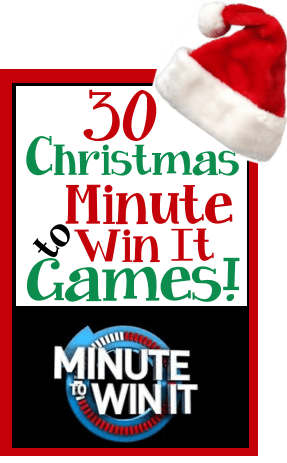 30 Fun Minute to Win It Games with a Christmas Holiday theme!

Choose your favorite Minute to Win It party games and let the fun begin!   All the games are fun and challenging at the same time.  Great for birthday parties and sleepovers for girls and boys of all ages!

Kids, tweens, teens and adults all have fun playing these games at holiday parties!

All of the games use easy to find items from around the house.

Tip!   If you have more then 6 people at your party set up different stations with a different game at each station.   Or divide into teams for the games.

Christmas Minute to Win It Games

1. Brrrr, It’s Cold in Here
Winter clothing, gloves, scarves, Christmas sweater, ski pants, etc.
Separate the players into two teams and give each team a Christmas sweater, Santa beard, ski gloves, a scarf, heavy pants, winter jacket or anything else you have around the house you would wear in colder weather. Try to have one piece of clothing for all of the team members except one. When the game starts, the teams must pick one person from their team to dress for the cold weather. The team that dresses their player in under one minute wins.

2. Candy and Nuts
Candy Canes and large mechanical metal nuts
Supply each player with a candy cane and large metal mechanical nuts. The players must use their candy cane to stack the six nuts on top of each other (the nuts should be stacked on their sides so you can see through all the holes). You can make this more difficult by requiring the players to complete this activity on a plate they are holding.

3. Candy Cane Pick Up
Large wrapped Candy canes
Give each player a candy cane to put in their mouth, with the curved side pointing down. The players then use their candy cane to pick up other candy canes that are lying on the table.

4. Catch a Kiss
Wrapped Hershey’s kisses
Split players into teams of two. Make the players in the teams stand ten feet apart and give one player from each team a small bowl of wrapped holiday chocolate kisses. The player with the kisses must unwrap a kiss and throw it so that his/her partner can catch it in his/her mouth. The team that catches the most kisses after one minute wins!

5. Caterpillar Wreath
Large Christmas Wreaths
Designate a start and finish line. Break players off into two teams and have them form a line. Supply each team with a big Christmas wreath. The last player in the line needs to put the wreath around his/her neck. He/she transfers it to the next persons neck without either of the players using their hand, then runs to the front of the line. The players should continue transferring the wreath and running to the front to become a part of the line until the wreath reaches the finish line.

7. Christmas Songs Redo
Lyrics to popular Christmas songs, pens, paper
Print out lyrics to popular Christmas songs, such as ‘Jingle Bells’, ‘Have Yourself a Merry Little Christmas’, or ‘Rudolph the Red Nosed Reindeer’, then give each player paper and a pen. The players have one minute to pick a song and rewrite the lyrics. After the minute is finished, the player sings his new lyrics to the group. The best rewritten song wins!

10. Hang the Candy Cane
Rope or string, large wrapped candy canes
Tie a rope or string across the room in-between two chairs or other tall objects. Split all of the players into two teams and have them stand on the opposite side of the room. When the game starts, each player must pick up a candy cane with his/her mouth, run to the rope, and hang the candy cane on the rope without using his/her hands. The player then runs back so the next person in line can go. The team to hang all of their candy canes on the line and make it back first wins! 3 – 4 candy canes per team member.

11. Holiday Pie
Whipped cream, red pompom balls
Separate the players into two to four teams and designate one player from each team to be ‘it’. The chosen player gets whipped cream spread over his/her face. The team members then have one minute to throw as many red pompoms as they can onto the person’s face with the whipped cream. The team who gets the most pompoms to stick on their team member’s face in one minute wins.

12. Jingle all the Way
4 empty 2 liter soda bottles, small bells, tape
Before the game, take four empty liter soda bottles and rinse them out. Put a large amount of jingle bells into two of the liter bottles, then tape the empty bottles on top so that it looks like a giant rattle. You want the openings of the bottles touching so that the bells can pass from one bottle to the other.
The players that are able to shake all of the bells down from the full bottles to the empty bottles in under a minute wins!

13. Jingle Bells Junk
Empty tissue boxes (large), rope or belts, jingle bells
Attach an empty tissue box to the player’s waist using a rope or a belt. The opening should be facing the back. Fill the tissue boxes with ten jingle bells. The players then must jump, dance, and wiggle around to get all of the bells out of the box in one minute.

14. No Time Like the Present
5 gift bags, table
Cut five gift bags to varying heights and put them on the floor in front of a table. One at a time, the players must use their mouths to transfer the gift bags from the floor to the table. The only body parts allowed to touch the floor are the player’s feet!

15. Ornament Destruction
Unbreakable Christmas ornaments, string, belts, empty soda cans, table
Attach a round Christmas ornament to a 2 foot string, then attach the string to a belt. Have the player put the belt on so that the ornament is in back of them. Set ten empty soda cans on a table and have the player swing the ornament around to try and knock over the cans. The players cannot use their hands! (Adjust the length of the string depending on how tall players are)

17. Peppermint Stack
Peppermint candies, bowls, popsicle sticks (optional)
Give players a bowl full of unwrapped peppermints and see who can make the highest stack of peppermints in a minute. The player’s stack must stay upright for five seconds to win! You can make this even more difficult by having players put a Popsicle stick in their mouths and make their stack on the end of the stick

19. Present Time!
Wrapped empty boxes (one for each player), several pairs of ski gloves .
Before the game starts, wrap one box for each player. One at a time, have the players put on ski gloves and try to open their presents in under one minute.

20. Red Christmas Tree
36 Red Solo type plastic cups
One at a time, give a player 36 red solo cups to stack into a pyramid, or Christmas tree, and then take back down again.

21. Red Light
25 Red Solo style cups, 1 Blue Solo cup
Give each player a stack of red solo cups and one blue solo cup, with the blue cup at the top of the stack. The player must transfer the blue cup to the bottle of the stack by taking red cups from the bottom and moving them to the top. The player to do this in under one minute wins!

Blindfold the players and give them one minute to transfer the cotton balls into the empty bowl using the spoon. No peeking!

25. Snowman Stack
Large marshmallows
Supply each player with a bag of giant marshmallows and have the players stack three marshmallows on top of each other to resemble a snowman. See who can make the most marshmallow snowmen in under one minute.

26. Snowball Toss
Large wreath, string, marshmallows
Hang a wreath in an open doorway and supply players with marshmallows. See who can throw the most marshmallows through the wreath in one minute.

27. Unwrap a Kiss
Holiday Hershey Chocolate Kisses
Give each player two handfuls of wrapped holiday chocolate kisses. The players can only use one hand to unwrap as many kisses as possible in one minute. The player to unwrap the most wins!

29. Winter Storm
Christmas cards, table
Set up five Christmas cards on the table. One at a time players have to try and blow the cards almost off the table so that they are hanging by one side of the card. The player with the most cards hanging off the table after 1 minute wins!

30. Wrapping Speed
Empty boxes, wrapping paper and tape
Supply each player with a box, wrapping paper, and tape. The players must wrap the box in under one minute to win!


More Holiday fun with  50 Christmas themed Would You Rather Game!