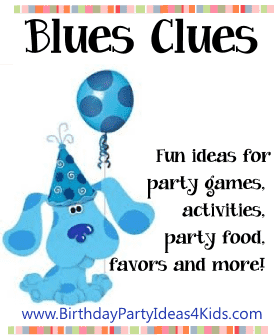 Fun and easy theme  ideas that will help Blue celebrate with your child.

Paw prints can be created out of blue paper or felt and paste onto the front side of solid blue note cards.

* Blue's paw prints are easy to make using one large circle with four smaller circles at the top.

Decorations
All along the pathway to the birthday party venue tape Blues Clues paw prints to the cement.

Cover the party table with a light or medium blue tablecloth and use dark blue solid color plates, cups, napkins and flatware.

Have a shovel and a pail at each guests spot at the table that they can use for the games, to collect piñata candy and to take home as a goody bag to hold their treats.

Let larger pails hold party food such as caramel corn, goldfish crackers, pretzels, etc. and use the shovels to serve the items.
For fun set out new blue plastic dog dishes for plates.

Blue and Magenta
This is played just like the game Fox and Hen.  Two bean bags are passed around a circle.  One beanbag is trying to catch the other one.  You need a blue bean bag (Blue) and a pink bean
bag (Magenta).

Have the children sit on the floor in a circle.  Give one bean bag to a child and the other bean bag to the child that is seated opposite them.  Tell the children that Blue and Magenta are playing tag.  Blue will try and catch Magenta and Magenta will try and run away.  They then start to pass the balls in the circle clockwise.  The game should get faster and faster as they try and catch and stay away from each other all at the same time.  When Blue catches Magenta a new round begins.

Pin the Birthday Hat on Blue
Place a very big poster of Blue on the wall and put a piece of tape on the back of paper party hats.  Blindfold the children, spin them around, and point them toward the poster. The one who pins their hat closest to the designated spot on Blue's head is the winner!

Blue's Prize Walk Birthday Game
Blue's Prize Walk is played exactly the same as a cakewalk.  Before the birthday party cut out large blue circles and put a number inside each one ... 1 - 15.  Then tape the circles to the floor in a big circle where kids will have room to jump from one number to the next number.

It is better if you have several more spaces then the number of children that will be playing.  Tell the children that when the music starts they will begin to walk or hop around the circle.  When the music stops they must stand on a number and stay there.   Have a container ready with the numbers in the circle and pick one number for the winner (you can also use 2 or 3 dice to determine a number) and that winner gets a prize or a cupcake.

You can also play this near the very end of the party and give them their goody bags as they win.  Then they can sit down and watch the game and look through their goody bag while they wait for their parents.

Bean Bag Toss Game
Cut several circles (about 5" wide) out of a piece of cardboard or a large box.  Decorate the cardboard with blue paint or make it look like a Blue's Clue's character.   Use blue beanbags or socks (filled with beans and tied) for the kids to throw into the holes.

Blues Clues Hunt
Before the birthday party set up a big treasure hunt that will lead children to 3 clues having to do with a part of the party.  The clues can hint at the birthday cake, presents, or a bounce house for example.   Draw three clues that have to do with the object you want them to guess on blue paw prints.  (Make the first one they will find harder so they won't guess it right away.)

In between the 3 clues set up several other clues on plain paper that will lead them from place to place around the party area looking for the next clue.  Kids love this game and will want as many clues as you have time to make.  To make it last longer assign tasks to some of the clues that the guests will have to complete before they are handed the next clue ... such as building a 4 foot high block tower, everyone must stand on their heads, build a human pyramid, do the hokey pokey, etc.

Before they start give each one of the kids a small notebook and pencil to write down any clues they find.  At the end of the hunt ask the children what they think the blue paw print clues mean ... when they guess right go and have cake or play the game you were leading the kids to find.

Shovel and Pail Relay
Set up two sets of pails and shovels (one for each team) with the shovels on one side and the pails on the other.  On top of a small table place objects for the kids to carry on the shovel to the pail on the opposite side. The objects can be small stuffed animals, Blues characters, blocks or small balls.

Divide kids into two or more  teams.  The teams stand in a line and give the first child in each line a shovel and tell them to pick up an item with the shovel and run to the pail and put it in.

Then they must run back and give the next child the shovel.  The first team to get all of the objects in the pail wins.  If an item is dropped while being carried on the shovel then the child must pick up the item, go back and start again. 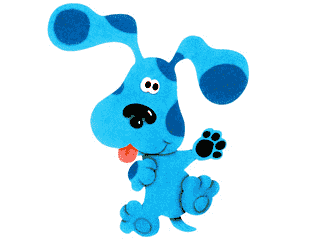