Easy to learn and play and also cheap games that are all played with a beach ball.

Summer outdoor and indoor games that are fun for large or small groups and parties. Find bulk and large beach balls on Amazon.

See our other pages for more fun games:

Beach Ball Boogie
Beach Ball, 2 laundry baskets or boxes for goals
Teams try to score goals by passing the ball to a teammate without it touching the ground.  Place a laundry basket or box on each side of the playing field – these are the goals.   Teams pass the beachball to each other, no running while passing, down the court and try to score a goal in the opposite teams basket. If the ball hits the ground then it becomes the other teams ball.

Beach Ball Hockey
Beach ball, full or 1/2 pool noodles, 2 baskets for goals
Divide the players into 2 teams and set up goals at opposite ends of the playing field.  Players use only their noodles to try to hit the ball into the other teams goal.  1 point for each score.   Play to 21 points.

Beach Ball Relays
Beach Balls
Relay races are a lot of fun and here are our favorites which all use a beach ball.   For all of the relay style games below divide players into 2 equal teams.  Players run, one at a time, from the start line with their team to the turnaround point (set up an orange cone or chair to mark it for both teams) and then back to their team.

Then the next player takes a turn and so on until all players on the team have completed the course.  Pick and choose your favorite relays or mix and match them for a long crazy relay!

Teams race with:
A beach ball between their knees

A beach ball pushed only by 1/2 a pool noodle

Rolling over a beach ball using only your stomach

3 team members each holding a pool noodle have to keep the ball off the ground by holding it at 3 sides.

Beach Dodge Ball
Beach balls
Play Dodge ball with beach balls!   All the fun and none of the pain.

Object of Beach Dodgeball:
Team players avoid being hit by balls the other team is throwing at them and at the same time try to eliminate players of the other team.

Set up:
Divide play area in half with a line of chalk or tape.  Also mark an X in the center of the 1/2 court line.  Draw 2 attack lines 10 feet from the center line in each direction. Draw an “end line” rectangle at the far end of each teams playing field. Place the balls on the center line - spaced evenly.

How to play:
Players start the game at the end line with one foot in the rectangle. At the whistle teams rush toward the middle and grab the beach balls only to the right side of the marker on the center line. Team members throw balls at the opposite team only after they have crossed back over their own “attack” line. Players may never cross the middle line or step out of bounds.

Players who are hit with the balls are out of the game.

If you catch a ball thrown at you (before it hit’s the ground) then the thrower is out.

** Bonus: After catching the ball an eliminated player from your team gets to come back.

Hitting a player in the face eliminates the thrower.

Beach Towel Toss
Beach Towels, Beach Balls, Net or pool noodles strung on rope
Players hold the ends of beach towels and throw a beach ball back and forth over a net.   Score just like volleyball and play to 21.

Write funny things to do on the ball and players stand in a circle and toss the ball back and forth.

When someone catches the ball they must do the crazy activity that their left thumb lands on.

Before they start they pass the ball.  They have to continue with their crazy activity until someone passes them the ball again. 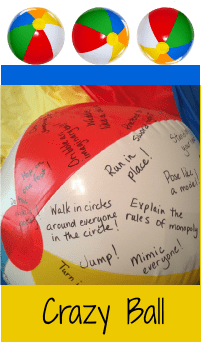 Hula Hoop Catch
Hula Hoops, beach balls
Divide players into teams of 2.  One player in the team holds a hula hoop while the other player throws a beach ball and tries to make it through the hula hoop of their teammate.  Start pairs of players fairly close together (10 feet) and move back one step for each cycle.

Players switch off holding the hula hoop or throwing the ball each turn.  If the ball touches the ground before it goes through the hoop the team is out.  The hula hoop holder can move the hoop to try to "catch" the ball, but can't move their feet forward or backward.


Hula Hoop Targets
Beach balls, hula hoops, string
Tie the string to the hula hoops and hang in different heights from tree branches.  Assign a point value to each hula hoop (10, 15, 20, etc.).  Players stand at a throwing line and try to throw 3 or more beach balls through the hula hoops.  For a challenge after each round move the throwing line back a foot and play until no one can make a ball go through a target.

Icebreaker Ball
Beach Ball, permanent marker
Before the party write questions all over the ball.

Players stand in a circle and toss the ball to a player across from them.

The player that catches the ball has to answer the question that their left thumb lands on and then throws it to another player.

Here are some fun Icebreaker questions from our Icebreaker Games page: 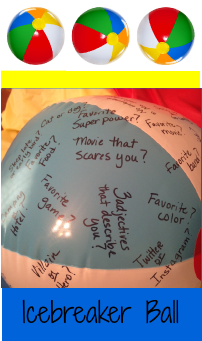 When the ball is caught the player has to name something from that category. 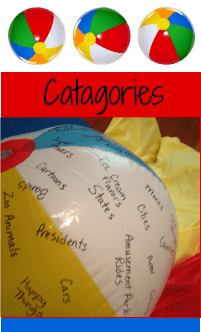 Here are some fun category ideas:

Juggle Beach Ball Circle
Beach Balls
Fun indoor or outdoor game for kids of all ages! Players sit or stand in a circle and one player is given the first beach ball.  The player calls another players name and throws that player the ball.  Play a few rounds so everyone is familiar with the game.

Then introduce another beach ball to the circle so that two players are calling a name and throwing their ball at the same time.  After a few more rounds add another beach ball, and then another and another.  Lots of crazy fun!   See how many balls the circle can have going at one time without dropping them!

Over the Head
Beach balls
Have teams make a line with a few feet in between each player and all face the same way.  Have players pass the beach ball over their heads behind them to the next player.

Variation:  Have players reverse direction and pass over the head and then the next player has to pass between their legs - alternate all the way down the line.

Pool Noodle Volley
Beach balls, pool noodles, volleyball net
Two players hold the opposite ends of 2 noodles.   They place a beach ball in the center and then toss it over the net where the opposite team must catch the beach ball with their noodles and toss it back over the net.

Scatter Beach Ball Game
Beach Ball
Played similar to Dodgeball, but there are no teams and no one is eliminated.
In a large playing area players all stand close the center.   The ball is thrown into the air over the players.

The first player to grab the ball can take three steps in any direction and has five seconds to throw the ball.   The player with the ball can throw it into the air again or  try to tag another player.  If a player is tagged they have to sit down.   To get back into the game the players that are sitting down or “out” can grab a ball if it is thrown near them and tag another standing player.  Fun and fast paced!  Great for all ages.

Place the beachball in the center of the playing field and at random call out a number.   The players from both teams with that number will run to the center and try to swipe the beachball and run it back to their team without getting tagged by the other runner.  Teams win points in 3 different ways:

The beach ball is returned to the center and another random number is called.  Play to 15 or 21 points.

Thunder Ball
Beach balls
Kids throw a beach ball in the air and clap their hands as many times as they can before they catch it.  Take turns or have a beach ball for everyone to play at the same time.

Water Gun Targets
Beach balls, string, high power water guns
Hang beach balls from tree branches by tying string around the beach ball valve.   Write different point values on the beach balls (5, 7, 10, 12, 15 points) where the higher point value is harder to hit.   Line players up and have them try to hit as many targets as they can with the water gun filled up only once.  When the beach ball moves you will know it's been hit.