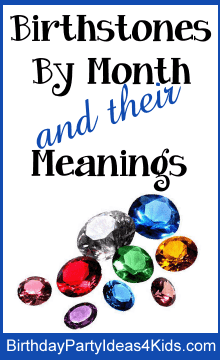 Birthstone colors, gemstones and meanings for all the months of the year.

The answer to "What's my birthstone?"

There is also a chart that lists the Birthday birthstones by month and also for each day of the week.

Birthstones have always been a good choice for a birthday gift no matter what the child's age.

Fun ideas for decorations, invitations, games, activities and much more.


Birthday Stones
There are also gems and stones that correspond to the day of the week that the child was born.  Birthday stones are a fun way to celebrate a birthday as a gift or as a birthday party theme!

Birthstone gems for days of the week for bdays

Spring Would You Rather

Valentines Would You Rather

How Did the Birthstone Tradition Begin?


The tradition of birthstones meanings probably came about from the breastplate of Aaron from the book of Exodus in the Bible.  The breastplate was adorned with 12 gemstones.  Each gemstone represented a tribe of Israel.
..and thou shall set in it, settings of stones, even four rows of stones: the first row shall be a sardius, a topaz, and a carbuncle; this shall be the first row. And the second row shall be an emerald, a sapphire, and a diamond. And the third row a ligure, an agate, and an amethyst.

A Sardius stone is now known as carnelian.

A Carbuncle is another name for a red ruby or garnet.

A Ligure references to Zircon or a quartz crystal.