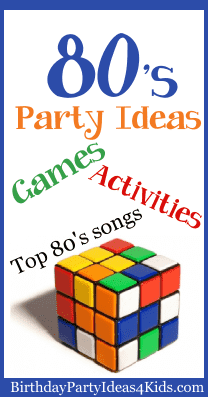 Step back in time to the 1980's with these fun 80's birthday party ideas for kids, tweens and teens.

We've even put together a list of the top 40 songs from the 1980's for your playlist.

Make a yellow note card into a "Party on Board" invitation.

Print out a Rubik's Cube and attach to bright colored note cards in green, yellow, red and blue.  Or make invitations that look like a large Boom box.

In the invitation ask guests to wear their favorite 80's fashions and give them suggestions like Neon glasses, leg warmers, skinny ties, over the shoulder sweatshirts, mini skirts, parachute pants.  Have a prize for the best 80's dressed.


Neon was very popular in the 1980's.  Use neon colors and to make it stand out use black or black and white checkerboard for backgrounds.  Black and white checkered tablecloths with Neon plates, flatware, cups and napkins.  Neon colored streamers or tulle hung from the center of the ceiling to the outer corners.

Neon helium balloons are a quick and inexpensive way to make a party instantly festive.  On the party table set a few serving bowls on top of Rubik's cubes.  Make large Rubik's cubes by painting square cardboard boxes - place them on tables and/or hang them from the ceiling - write slang on the spaces of the cubes.

To decorate (and also use as a photo op for the guests) buy life size cardboard cutouts of famous 80's stars or icons such as the Blues Brothers, Pac Man or Mr. T.

The 80's was a great time for music ... make records (cut large circle from black paper and smaller circle from neon paper - glue together and write song title and artist in the center) or large cassette tapes with the favorite bands of the 80's.  Or find rock band posters and tack them on the walls.

Time machine
Transport guests to the 80's by letting them dress up in some fun 80's fashions.  Set out leg warmers, skinny ties, neon sunglasses, tutu's, rocker wigs, big jewelry, blow up guitars, etc. that they can use to accessorize their outfits.  Paint faces with 80's characters such as my little pony, Pac man, Rubik's cubes, etc. and some big bold neon eye shadows, nail polish and lipsticks.

Spray on pink and blue hair color and glitter. (Tip: have a few x-large trash bags on hand to keep guests clothes from getting stained.  Cut a slit in the bottom of the trash bag about 5" wide in the center.  Place the bag over the person - their head goes through the slit so their body and clothes are protected. )

Make Neon Tutu's
Tutu's were a fun rock n' roll look for the 80's.  Let everyone make their own using our easy no-sew directions using tulle and ribbon (or elastic).
Use fun neon color and black tulle.  How to make a tutu

Paint Spatter Shirts
Make fun paint spatter shirts.  On white or black shirts let party guests spatter paint on their shirt using a paint brush and flicking paint at the shirt.  Also a great idea for sweatshirts - cut the neck out for a real 80's look.

Thriller Dance
Thriller was a huge dance craze of the 80's.  Learn the dance and then teach it to everyone at the party - practice and then video the group doing the dance.  You can burn the video onto a disc and send it home as a thank you.

Vintage Games
Video games were just coming out in the 80's.  Find some fun 80's video games and let everyone play them.  Some great ones are Donkey Kong, Pac Man, Ms. Pac Man, Tempest, and Centipede.

80's Movies
Get the popcorn and watch some fun 80's movies like Back to the Future, Footloose, Sixteen Candles, The Breakfast Club,  or Star Wars.

Karaoke
Make a Karaoke station and play 80's music.  Let the guests sing along to the great songs and if possible find some reruns of the 80's MTV show and sing along with the great bands of the 1980's.